A rising proportion of the work we do is concerned with stables and farms. For many years we have worked with leading trainers around the British Isles Downs, identifying the optimum position for their stables and each particular horse.

An increased awareness in animal welfare has enlightened many farmers and owners to the fact that animals are more sensitive to their surroundings (often more so) than previously believed.

Case Study One: The Military Base and a Nearby Farm

Two years ago, we visited a cattle farm in the North of England, which was adjacent to a military base. An existing client of ours recommended that he see us due to constant, severe headaches. When we were speaking to him, he gave us a little information about the background of the farm and he spoke about a worrying problem with his cattle – 14 of them had aborted their young in a field for no clear reason. It has puzzled the farmer and vets. We arranged to visit the property.

An on-site visit and further investigations revealed that the farm and it’s occupants were being affected by two external factors. The first of these was that the nearby military base had recently has a new and much more powerful radar system installed which was sweeping directly above the farm property, bathing the farmer and cattle in polluting electromagnetic frequencies. This is an example of the inclusive nature of the work we aim to do – we look at every factor which could be affecting the health of the occupants, far beyond the scope of solely Geopathic Stress.

The farmer rearranged his living and working area to avoid them. After this his headaches improved about 50% but the radar remained as a constant pollutant.

He had already decided to move his cattle to another field he owned and we had identified as ‘safe’ and when a new lease came up at a local smallholding, he moved him and his cattle to the new property.

On a subsequent visit we had reported on the second property and assessed that he would not suffer from the same problems.

Ten months after our intial visit, his headaches and general health were back to normal and the cattle were in tip-top condition.

A little while ago we were asked to visit the home of a horse owner who had heard of our work with stables. With a large house and fields in Hertfordshire, he had encouraged his daughter’s love of horse riding and has built a small stable block and exercise ring for the horses but she had been unable to enjoy the horses as they were constantly unwell.

Both young, the horses should have been in good health but they had never flourished since their arrival at the house. The owner already suspected that the stables were the cause but could not work out why. They had been constructed by a local builder who had used cheaper building materials and the inclusion of cheap steel material as a strengthening material was acting like an amplifier for the naturally occuring areas of Geopathic Stress. The horses were standing directly over the worst areas.

The rubber pelleting in the exercise ring was also toxic to the horses. Both of these factors were revealed as soon as our Geopathic Stress Survey was completed.

The solution: The rubber pelleting was replaced with a natural material. The cheap flooring was removed and replaced with a healthier alternative for the horses and their position in the stables was altered to take advantage of the areas NOT affected by Geopathic Stress.

Within two months all the work was completed and the result was two very happy and healthy horses.

You may be thinking that the cost of the alterations would be prohibitive and why would the owner go to such trouble? The initial price of the horses was a sizable investment and looked on as a long term interest and added to this was the mounting cost of the weekly vet bills for the two sick horses. Overall the money spent on the stables was more than recouped.

Monthly health tips, information and offers. Fill in your email address below to receive our low frequency newsletters.

Get Your News Widget

Illness and Geopathic Stress Research into Geopathic Stress started in the early 1900′s with scientists, based mainly in Europe and America.  By 1929,  a Baron Von Pohl from Germany, made a claim that cancer was caused by negative energy currents under the bed of sufferers of the disease.  He initiated tests in a Bavarian town and was given permission to survey the town with dowsing rods. His results showed high levels of coincidence between houses with measurable geopathic stress and those

What Happens At A Consultation? If you are having EAV testing for intolerance of health issues, after arranging an appointment, you will visit our offices in Crowthorne, Berkshire where the initial session will take just a little over an hour. A detailed medical history will be taken from you and you will have readings taken with the EAV machine and iridology readings. The techniques are totally non-invasive and painless. You will not have to remove any clothing although Michael may need 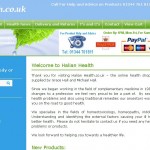 All of our products and services can now be found online at HalianHealth.co.uk